We have regular events throughout each month. Please ensure that you register for any event you intend to attend. While our events are free of charge, donations are welcome in support of our ongoing events. 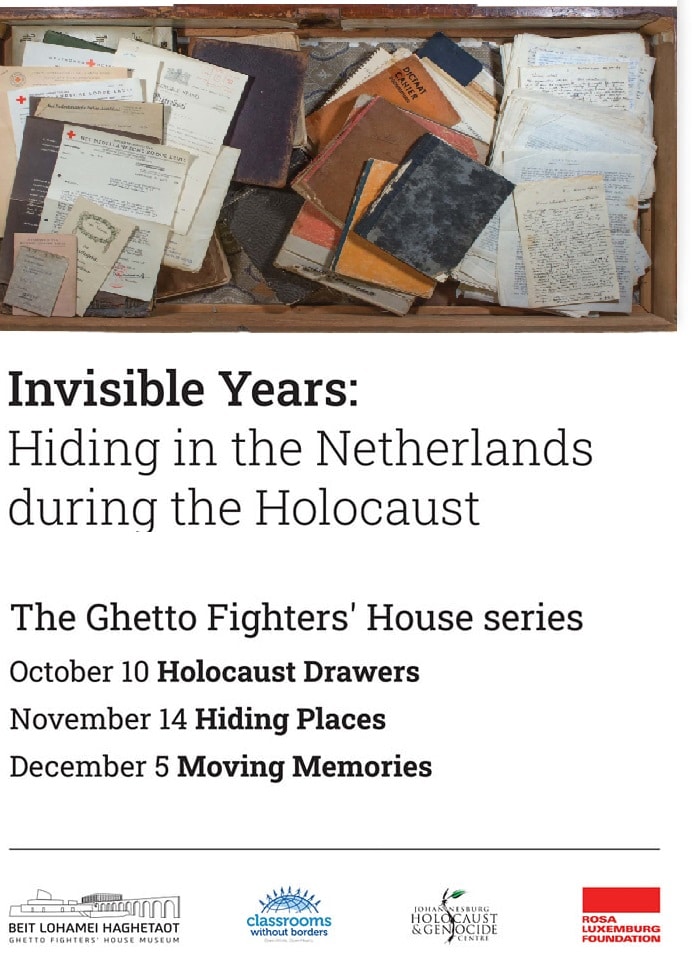 Join us on Sunday 5 December at 9pm for a webinar exploring Moving Memories. This is the final lecture in a three part series on Invisible Years: Hiding in the Netherlands during the Holocaust. Register using the link: https://us02web.zoom.us/meeting/register/tZMsc-2ppj4sEtQ3FtrjnGEqLrjdq7ysOX-3

Invisible Years is an intimate portrait of an extended Jewish family living and hiding in the Nazi-occupied Netherlands, written and beautifully designed by Daphne Geismar. Geismar and her cousin Sharon Strauss went on a fourteen-year odyssey after discovering that their mothers both had “Holocaust drawers,” in which they kept letters, journals, documents, and photographs.

Barbara Kirshenblatt-Gimblett, Ronald S. Lauder Chief Curator of the Core Exhibition at POLIN Museum of the History of Polish Jews, in Warsaw, and Professor Emerita at New York University, will engage filmmakers Kira Dane, Katelyn Rebelo, and Carmen Fernald in a conversation about experimental approaches to Holocaust documentaries. Dane and Rebelo are currently working on an experimental documentary short based on Invisible Years, about the survival of a Dutch Jewish family. Fernald is making a documentary about those who hid people in the Breeplein Church and the people they hid for the Dutch Broadcasting Corporation. How are these filmmakers redefining the documentary film and creating a new hybrid genre, as they move away from the conventions of voiceover narration and first-person interview, turning instead to animation and other visual media to represent the Holocaust?

This program is in partnership with the South African Holocaust and Genocide Foundation, the Rosa Luxemburg Foundation, Rabin Chair Forum, and Classrooms Without Borders.